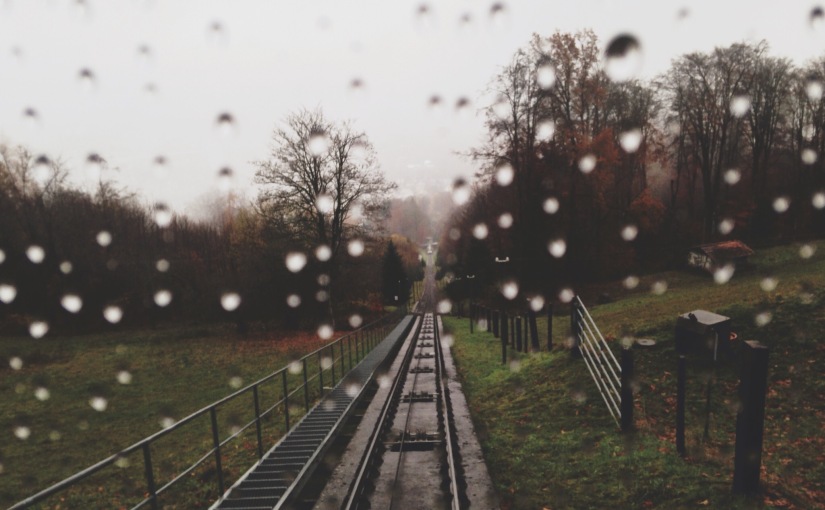 Today marked our first and only day of not-so-great weather which in my mind is pretty good for an eleven day trip.  So we slept in a bit and then enjoyed tea and espresso in our hotel’s awesome lounge area.  And after layering on our warmest clothing, we finally ventured out into Bern.

We walked through a few markets , taking in the vibrant sites and breathing in the warm smell of roasted chestnuts.  We tried them in Florence and we were not fans, but I do have to say that they always smell incredible and instantly make me think of Christmas thanks to that beloved old song.  We also stopped to take pictures along the way, Jeremy taking the artsy cool shots that will end up hanging in our home and me taking ones of him. 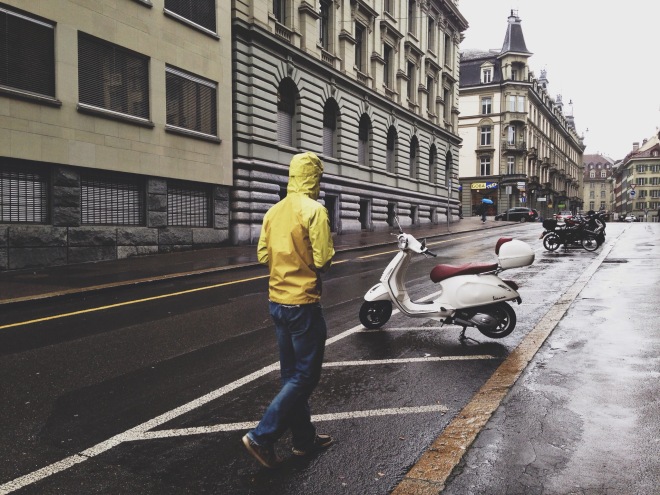 I will say that today was the only time that I regretted not packing my rain boots.  I couldn’t justify the space that they would have taken up which I’ll now use to get all the Swiss chocolate home that I bought.  That being said, we did eventually end up with wet shoes but did pretty well keeping mostly dry overall.

We had toyed with the idea of taking a train to Zurich today, but had a hard time justifying the cost for a day that was kind of just miserable out.  Jeremy decided to be fun and researched a closer adventure that ended up being completely free thanks to the bus vouchers that we got from our hotel.  We ended up by Gurten, Bern’s local mountain.  We took a cable car ride to the top and were  delighted by what we found.

At the top of the mountain, were incredible views and a pretty cool park to go along with it.  When we saw this luge toboggan run we assumed it was perhaps some sort of training site.

We learned later that it was intended for children.  Which would explain maybe why the Swiss bobsled team was so fiercely good (or at least it was in whatever year the movie “Cool Runnings” took place… and if you haven’t seen that movie, you totally should). 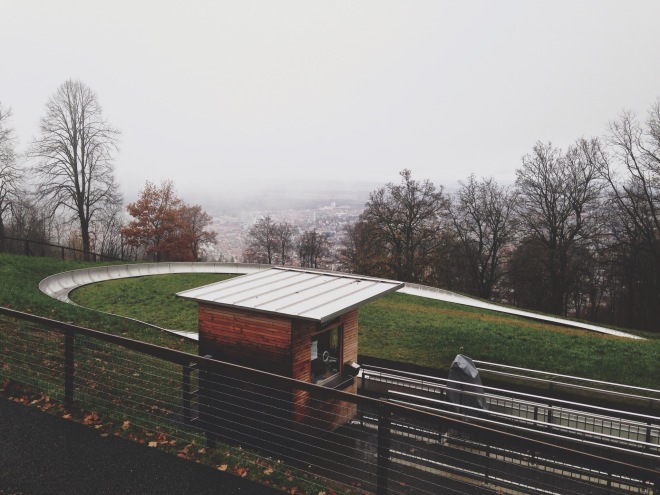 Back to the views.  Our only regrets were knowing that on a clear day we probably sould have seen more of the Alps.  But besides that, it was quite beautiful to be up in the clouds. 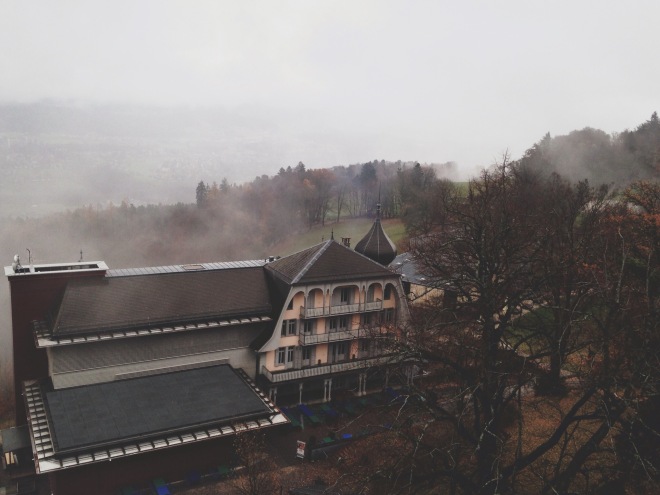 While enjoying the park, we stumbled upon this 80 some foot high tower.  Of course we climbed to the top, because why not? 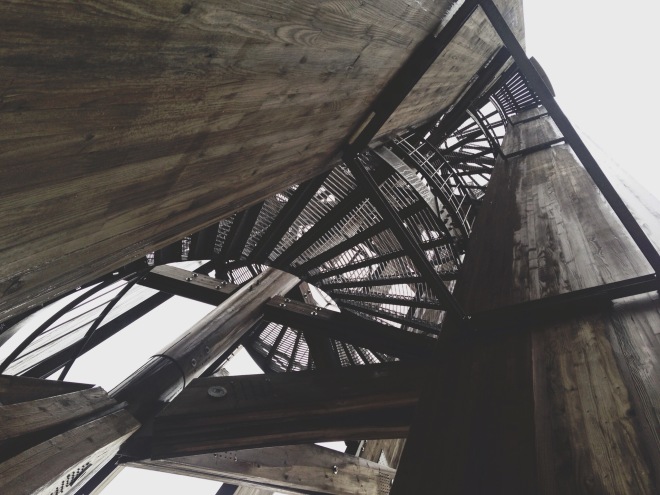 I’ll be honest, it was a little treacherous and the winds were pretty strong at the top.  But it did create a memory and also reminded me that I probably need to get a little more cardio in when I get home.

The cable car ride down was fun when I wasn’t thinking of what would happen if the cable snapped (I’m guessing it would have been a bit like a terrifying rollercoaster ride).  Thankfully all was well and we arrived at the bottom safe and sound.

When we arrived back in Bern, we went to warm up in our hotel for a bit.  Then we finished off our night at the train station which is pretty close to our hotel, Because everything else in Bern closed around 5:00pm. 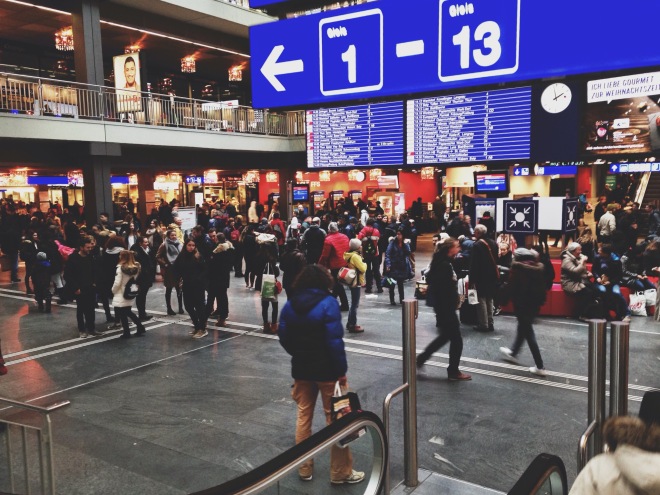 We enjoyed dinner and a little shopping.  For the record, francs are pretty.

And the grand finale of our night was when we finally checked out this beautiful Swiss chocolate shop with the intention of buying something  delicious. 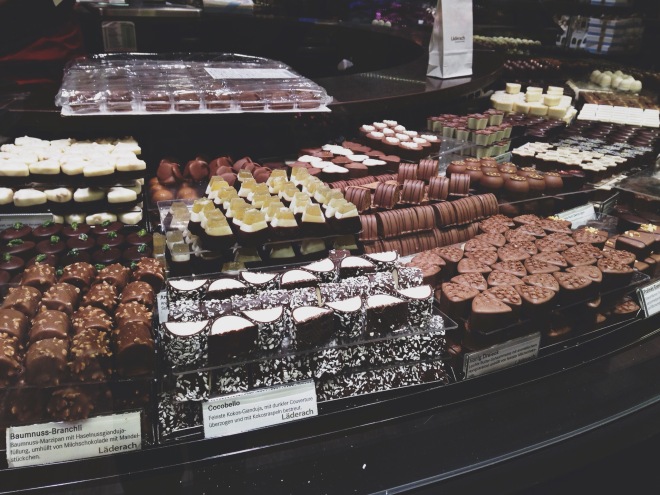 Swiss chocolates are legendary and these ones were carefully hand crafted with love.  It was hard to chose because the selection was overwhelming, but in the end, I went with this mix of milk, dark, hazelnut and coconut.  And I’m not even exaggerating when I tell you that they were the best chocolates I have ever eaten in my entire life. I can’t even imagine how many francs I’d spend or how much I’d weigh if we lived in Switzerland because these chocolates were just outstanding.

So that pretty much sums up our time in Switzerland.  Tomorrow morning we will head back to Milan and then on Monday will fly back home to New York.  It’s been an incredible journey that is for sure but we are definitely looking forward to getting home to our family and back to our awesome lives.