So Ellee was invited to a birthday party up in Huntington, and when I Googled directions, I realized it was only a mere ten minutes from Michael.  So I dropped her off in the good care of her friends and headed over to the Rehab.  When I walked into the room, Mike (Michael’s Dad) was there with Michael.  I’ve written and shared so much about Sally because we usually visit Michael during the day and most times that we visit, she is the one who is there.  But I realized today that Mike is usually the one, behind the scenes, as steady and strong as one could be considering the circumstances.  And I have to say, it really was nice being able to chat and catch up with him during my visit with Michael this afternoon.

During our visit, Mike shared a few things that stood out in my mind.  He caught me up on their home remodeling plans.  I immediately noticed that he had the same passion as Sally in his voice when he talked about how good it would be to have Michael at home with them.  Mike is a hard working man, and throughout this journey has spent countless hours driving back and forth from hospitals and rehabs to be with Michael.  You can imagine how exhausting this has been and as he shared, I silently prayed that God would indeed provide all that this family needed in order to bring their son home so that they could all be together.

Mike also shared about how nice it was to be getting home cooked meals brought over during the week.  We have a Team Einfeldt Facebook page for people who are interested in helping the Einfeldts through this next year of their journey.  One of the ideas that we came up with is to bring meals twice a week to help Mike and Sally since most all of their non-working time is spent driving and being with Michael.  Mike said how good the food has been and how it’s been very helpful and appreciated.

During our visit, Michael’s aides came to get him up out of bed and into his chair.  He was looking good when we got back to his room and he was all situated.  It was really encouraging because during my visit, I was able to see Michael making some good movements with his leg, which is something that I hadn’t seen in awhile.  Mike shared that he was getting some good therapies in at his new rehab and that overall they felt that this was a good place for Michael to be right now.  After Michael was in his chair, Mike noticed that he didn’t have his shoes on.  So he bent down, took off Michael’s braces and carefully and tenderly helped put his shoes on.

It was so touching to see.  Because even though it was a simple and routine act, Mike did it with such compassion and love.  We don’t always know what life will bring, or the unexpected and difficult situations that we might face.  But isn’t it often how we respond that matters most?  Throughout this past year I’ve seen Sally and Mike respond in some incredible and selfless ways.  Both have placed their everyday lives aside to be there and to care for their son.  At times, I’ve wondered where Michael would be, if it weren’t for the love and dedication of his family.

In Psalm 103, it talks about the compassion that a Father has on his children.  And it compares it to the compassion that God has for us as well.  I’m thankful for the time that I was able to spend with Mike and Michael today, but also very thankful for the beautiful reminder of the power of the compassion that I saw, between a father and his son.  This journey has not been easy, but there have been such beautiful moments along the way and this was truly one more of those times.  Please keep Mike in your prayers.  And we can be thankful because Mike shared that overall Michael’s had some good days and for that we are so very happy.  Thank you for reading this and for continuing to share in Michael’s story. 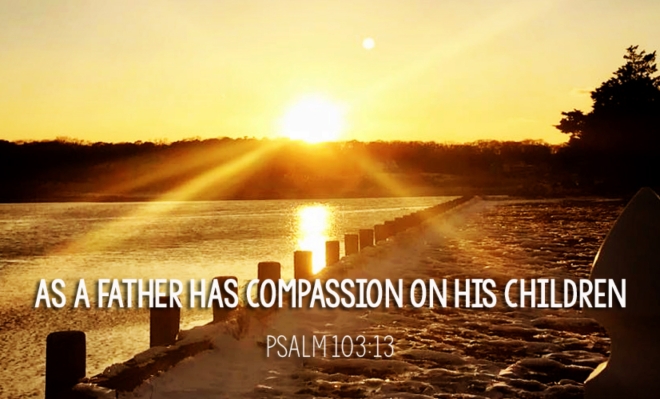 2 thoughts on “A Father”