I usually try to get up with Christian before school each morning.  I say “try” because he gets up crazy early because he’s in Jr. High this year and the bus comes at 6:40am.  If I’m being honest, some mornings, I don’t make it up (probably because I don’t go to bed till midnight most every night).  And some mornings, like this morning, he makes it a point to be gracious and let me sleep in.

On the mornings that I do get up with him, I read verses from the book of Proverbs while he eats his cereal.  There are lots of great verses in that book of the Bible, many having to do with being wise and not foolish (which is perfect advice for a Jr. Higher) and others just encouraging us to do good things.  It’s also nice because there are 31 chapters, which makes it easy to just figure out what day it is and then read the chapter that corresponds.  Today’s chapter was 17.  But Christian kindly decided last night that today was a “let Mom sleep in morning.”  He told me that he would read the Proverbs chapter on his own.  So last night, before I went to bed, I wrote him a letter pointing out some good verses that he might like.

One of those verses was Proverbs 17:17 which says, “A friend loves at all times.”  In my letter, I encouraged him to be a good friend today at school.  And I didn’t think too much of it until now.

Yesterday I got a text from Sally.  She told me that Michael had gotten a fever and that because of that, they weren’t able to go Upstate to the new rehab.  I told her we would be praying and then made plans to drive up this afternoon to visit her and Michael.

When I got to his room, he was doing a little better.  The current plan is, if all goes well today that they will head up tomorrow morning.  I got to catch up with Sally and also visit a little with Aunt Krisha who had come up to sit with Michael so Sally could go home and pack for their trip.  It was nice to get to see Michael again and to talk to him.

During my visit, I felt compelled to share again how much his friends loved him and were praying for him.  One of his friends, Carson made the coolest Star Wars ship to send up with him to his new Rehab.  As I was telling him this, Michael double blinked, which is his response for yes, or just that he agrees.  I moved on to share about Steve-O who had taken a trip to California and Justin who was at college and other friends and updates for them as well.  And every time I named one of Michael’s friends, he double blinked for each one. 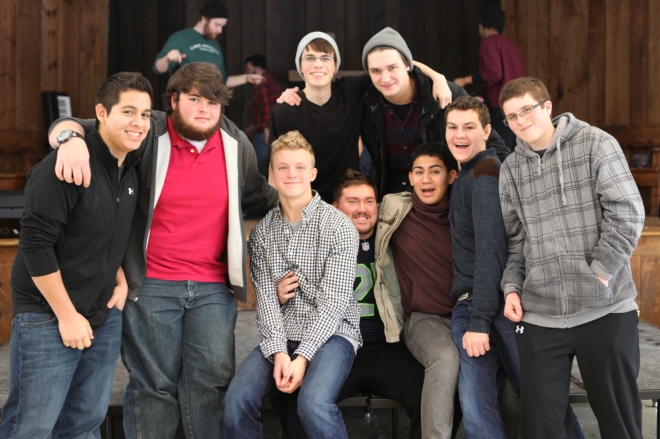 I thought this was so cool.  Because to me, it signified how much Michael loves his friends.  And because we still see many of them throughout the week, it’s evident that they all love him as well.  Many wear the blue “Love and Strength for Michael Einfeldt” bracelets and always ask if there are any updates.  Seeing their friend Michael go through such a difficult year has been hard on them.  But the love and the prayers are always there along with the deep bonds of friendship.

“A friend loves at all times.”  This might look differently at different times in life, but it generally always means the same thing.  It means that being a friend is being someone who makes a difference in someone’s life.  It means that even though you might not always be able to be with that person, you’re always with them in heart.  I’m so thankful for Michael’s many friends and for the difference they have made.

Thank you all so much for your prayers for Michael and his family.  I know that it means so much to them and I know that God will continue to be with them as they make this transition to Michael’s new rehab.  We are praying that Michael will be well and stable enough to head up tomorrow morning and for his new facility and support team as well.