I had a realization this afternoon.  I might be the crazy mom.  It wasn’t something that I was aware of, until a series of incidences today caught my attention.

It started early this morning.  Christian had his first Cross Country practice up at the High School.  He had to be there at 8am, which meant that Ellee and I also had to be there.  I knew we would wait at the school because it was kind of far to go there and back twice within the hour and a half practice.  But instantly in my mind, I turned it into a positive.  “Ellee,” I shared eagerly with her, “This is perfect, because you and I can go for a long walk while Christian has practice!”  Her enthusiasm was a bit less.  And a bit more less while we were walking around and it was kind of hot and humid.  “Isn’t this fun?” I’d inquire as we walked along.  And when we decided to turn walking on the curb into a pretend adventure of don’t fall into the hot lava, it did get a little fun and we ended up having a great morning.

I don’t know what to say.  I’m a huge fan of our kids getting out and moving.  Maybe it’s part reminiscent of my childhood, where we literally played all day coming in only for meals or when it was dark.  Maybe it’s part wanting to avoid the excessive screen time that seems to draw in so many kids these days.  And maybe it’s part just wanting them to be strong and healthy.  But for me, it’s always in the back of my mind and always something I’m pushing with our kids.

The second incident happened when we got home.  Ellee asked to watch a show, and immediately added that she would do the stepper while she watched.  Because a few weeks ago in our attic, I rediscovered a lateral thigh trainer that I had bought a good ten years ago, probably wanting to get back in shape after having our kids.  It’s basically like a small stepper and so I brought it down and told the kids it was the new way that they could watch shows.  Getting in a good thirty minutes of stepping was the perfect way to get in exercise as well as entertainment.

The third incident that probably confirmed the possibility of me being too crazy was when Ellee went out to ride our electric scooter this afternoon.  I was glad she was getting fresh air, but also wanted her to be a bit more active.

So we turned it into a game.  I put out a sign up sheet where she could sign her name every time she did two laps down our little road and back.  I gave her bonus points if she switched to the little razor scooter that I picked up for her for $6 at Savers.  That was much more active in my mind and when she heard bonus she was all in.  It was also an educational opportunity for her to practice writing her name in script.  We were strategic when we picked the spelling of her name knowing it would be fun for her to write someday since it’s mostly just loops. 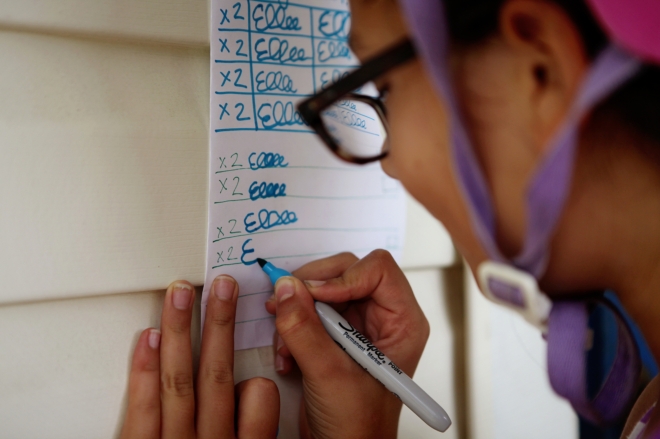 She grumbled a bit at first.  But then was all in.  I filled up her fancy water bottle that sprays mist.  When I bought it, I justified the $13 cost by telling her I’d buy it so she could use it on walks and runs.  Again, a bit like a crazy mom, right?

All that being said, she spent a good hour or so, riding up and down our road.  She was active and having such a fun time.

“Look Mom!” she exclaimed,”Look at me, I’m SWEAT-ing so much!”  She said it with a hint of exhaustion, but also a lot of pride.  She knows how much I value a good sweat, being a frequenter of Hot Yoga where you practically sweat out half your body weight (exaggeration, but seriously, it’s a lot).  So I could tell that she was a bit delighted that she had worked up a good sweat as well.

And as I watched her finish her rides, I did wonder to myself if it made me a crazy mom that I am consistently looking for ways for our kids to move their bodies and be active?  I concluded that probably it did, a little bit.  But then I realized that I’m okay with it.  Part of being a parent is teaching our kids how to be healthy and how to do life well.  And even though it may make us seem crazy, talking our kids into walking for an hour for fun, doing a stepper while watching a show or riding scooters to earn surprises, in the long run, it simply reflects our very best intentions, right?

We are parents and we are the first line of support for our kids.  It’s our jobs to love them and to teach them the best possible ways to live life.  So don’t be afraid to be a little crazy, especially when it comes to doing something that you know will help and benefit your kids in the long run. 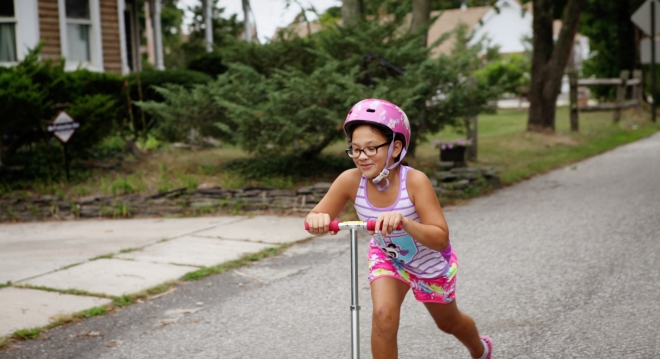