We had a pretty awesome Fourth of July.  Sure, it wasn’t perfect as evidenced by the smudge that I must have had on the lens of the little camera that I brought to capture some of our adventures, but overall we had a great time celebrating our nation’s 240th birthday (well 240th year since the thirteen colonies declared independence so technically not a birthday, but kind of… Also, I totally Googled “how old is America” to find that information).

Anyhow, we decided to take a little family adventure today, so we brought the kids up to Greenport to check out some of the fun spots we found earlier this year.  The kids and I drove in the car while Jeremy hopped on his bike and rode all the way up.  He’s kind of an amazing road biker these days.  We’re pretty proud.

When we got to Greenport, we walked around a bit.  Our first stop was to check out Goldsmith’s Toys and Electronics.

Out of the kindness of his heart, Christian gave his sister $5 this morning so that she could have some money to get something special.  She quickly decided on a small stuffed animal, because she loves animals and small things.  But then came the hard part of picking the right one.  Grandma had actually bought her the blue owl at Eastport’s Little Secret a few days ago, so she ended up deciding that the fox would be the right choice to add to her collection.

It made me smile watching her.  First because it was nice to see her brother doing something kind for her.  I don’t know about your kids, but mine certainly have their moments and especially when summer rolls around and they are constantly with each other.  So it’s moments like these that I want to hold on to and cherish.  And secondly, it totally brought me back to being a kid again and getting the chance to pick something new to add to a collection.  Growing up, I collected all sorts of things and so I loved the nostalgia of seeing my own daughter work to make her decision. 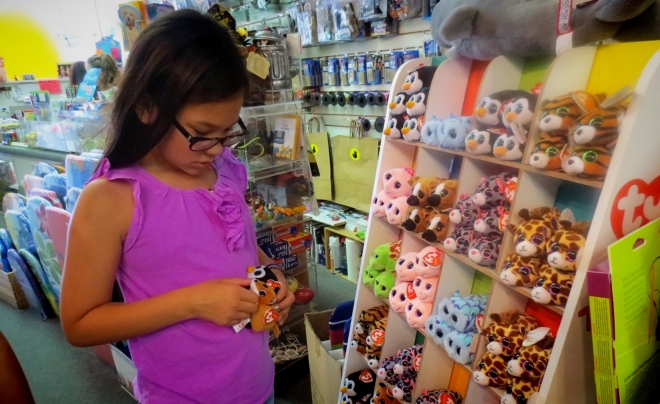 Afterwards, we walked over to our favorite lunch restaurant, Lucharitos.

We poured over the menus to find something delicious. 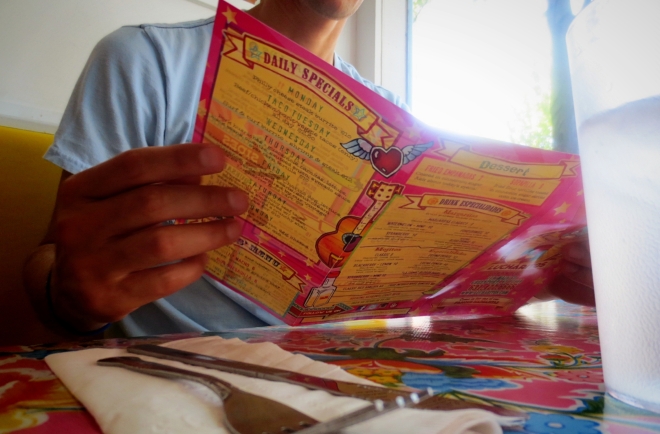 I ended up with the Beer Battered Shrimp Tacos and they were pretty delicious and Christian got a quesadilla that he was pretty happy with.

Jeremy and Ellee picked wings, one opting for spicy and one for sweet.  Both plates were excellent and overall we really had a great meal all together.

Side Note:  Sitting next to Ellee, I marveled at her natural highlights that always come out so beautifully in the summer.

After lunch, we walked over to Mitchell Park and Marina.  We strolled along the docks and marveled at some pretty awesome yachts that were parked there.  Granted, I doubt I will ever relate much with someone who could afford one of these beauties.  But I can say that I do relate with the one that declared, “Life is Good,” because really, it really is. 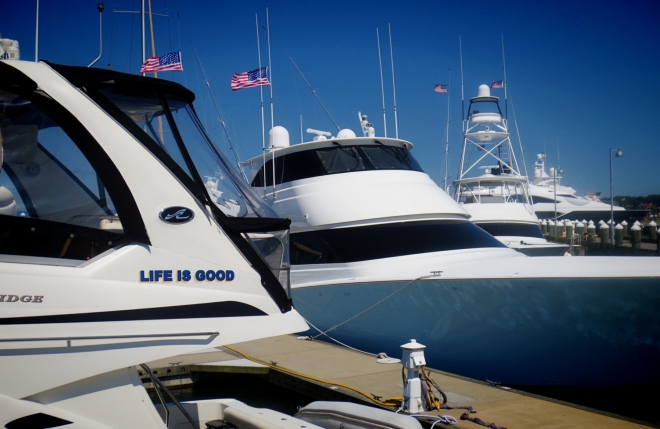 It was about this time in the afternoon, that Jeremy needed to start heading back.  Because whereas we only had about an hour drive, he had a two hour ride back, going against the wind.  So he took off and the kids and I enjoyed a little more time walking around and eventually getting some gelato at D’latte.

We all got home around 5 and had just enough time to get ready to head over to the Paskiewicz’s home for a barbecue with friends.  I brought my good camera with every intention of taking pictures, but ended up having more fun chatting with friends and catching up.  And that’s okay.  Because sometimes it’s more important to live in the moment, than to worry about taking pictures of it.  I literally only ended up with a few pictures, including this one which I thought I’d share because it made me smile.

We ended our night with some yummy desserts and then a fun personal fireworks display compliments of Scott and the boys.  I would have taken pictures, but learned a long time ago that pictures of fireworks are never quite as good as just taking in the real thing.  So that’s what I did.

Wrapping this up, I’m thankful for the Fourth of July.  Partly for it’s fun food and adventures and get togethers and fireworks.  But most certainly for the fact that it represents the celebration of a nation that is free.  I’m so incredibly thankful for our freedoms and never want to take for granted living in a place that allows us to enjoy them in such a beautiful and wonderful way.

Happy, happy Fourth to everyone!