We spent two different days with Michael and his family this week.  As Michael has moved on to the next step of living at St. Johnland’s Rehab, we’ve worked to find a new normal in loving and supporting him and his family.  It’s been a bit of a transition but it’s slowly working itself out.  That being said, I just want everyone to know that I will continue to share posts and updates as they happen and of course any new prayer needs, but it may be on a different pace than the first three months were.

That being said, our Tuesday night visit was pretty awesome.  Because for the first time in a long time, the entire Einfeldt family was all together.  Michael’s oldest sister Katelyn and her husband Luke were visiting from Canada, and it was also the first time that the Einfeldt’s dog Cody was able to come and visit.

Cody is an incredibly important and loved part of the family.  It’s been tough these past four months as life has changed in many ways for everyone.  But through it all, Cody’s been a source of comfort for everyone. 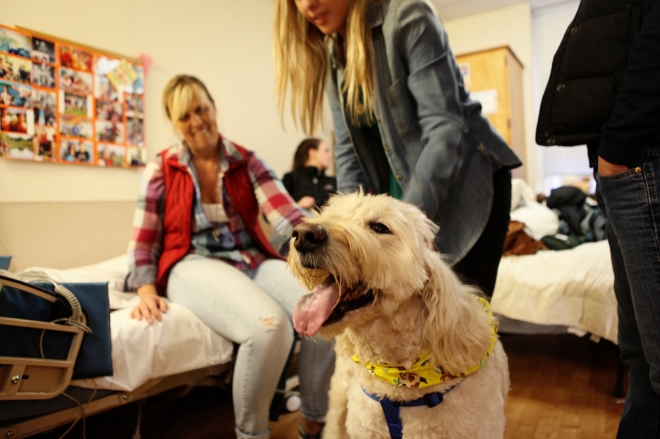 It was so, so cool to see him get to come and visit Michael.  He was pretty excited to be with his whole family and it was sweet to see the ways he reacted to seeing Michael and to being around so many people who just loved him so much.

There was a full house in Michael’s room that night.  Lisa Anderson was visiting and a bit later, Sarah’s boyfriend Luke joined the party as well.   It was just so, so heartwarming to see everyone together, loving and supporting each other.  In the midst of tragedy, the love and strength of one’s family and friends makes a huge impact. 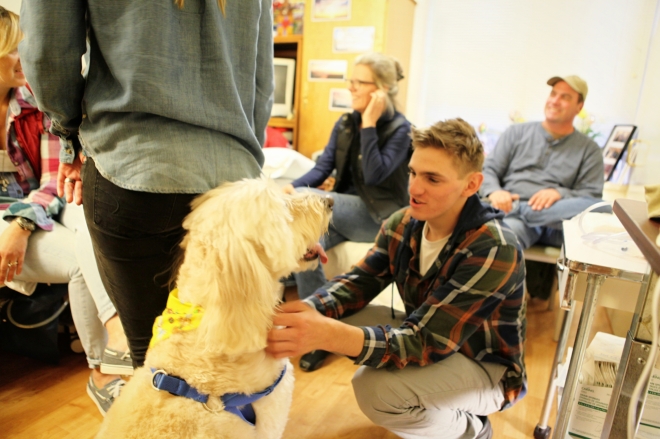 The Einfeldts ended up leaving a bit later for dinner since none of them had eaten yet.  In Kings Park, there are a variety of restaurants that the family is growing more familiar with as they settle into being there for and supporting Michael in his new place.  So when they left, Christian, Ellee and I had a good 45 minutes visiting with with Michael.  I’m so glad that they have the opportunity to see Michael and to be around them.  Christian has done a great job with everything.  Ellee’s a bit younger, so she had more questions about Michael and how he was doing and was a bit more timid at first.  But it was sweet to see her warm up to Michael and she smiled shyly when she softly told him that she was praying everyday for him.

When it got to be time to leave, I told Micheal that we were going to have to go.  When I did, he opened his eyes wide and pulled him hand tighter to him.  So I asked him if he would like us to stay a little longer.  He relaxed his grip and slow blinked “yes” to me.  He ended up doing this two more times ( so we stayed longer and longer) before we finally had to go.  I wanted to share this because even through Michael is limited in many ways right now, it’s still such a comfort to see that he responds to things and that he is learning how to communicate in new and different ways.  I fully believe that God will continue to heal and strengthen his brain and body and am so thankful for the little ways that we see this happening already.

I think that time will be the key leading to Micheal’s recovery in Rehab.  I was talking to my Mom and shared that I’ve learned that brain injuries and healing just takes time… and sometimes what seems like lots of it.  But we can be so thankful, because Michael is in a great place where lots of great people will work with him to help him to get stronger.

I’ve known for quite awhile, that God works in His own timing.  And when I was a little girl, I remember memorizing Ecclesiastes 3:11 where it tells us that God makes everything beautiful in its time.  We can keep praying and trusting God with Michael and his recovery because I know that God will work for good and that He will make everything beautiful in time for Michael and for his family.  He promises this for our lives as well. 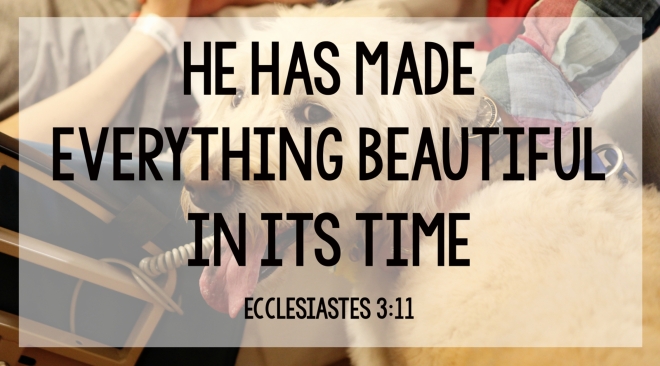 We also got to see Michael for a bit this afternoon.  He got a few vaccinations yesterday so unfortunately today was struggling a bit with storming because of them.  Please pray for the right dosage of medications to help him and that his body with be able to rest and to recover in the best possible way.  Thank you for continuing to share in this journey.  Your support and prayers mean so much to Michael and his family.

2 thoughts on “Everything Beautiful”