This afternoon, Christian ran into the house so excited.  I was in the middle of getting lunch ready, so all I heard was “Baby ducks… have to save them… I’ll be back!”  To which I replied, “Huh?” and then made him slow down and explain what he was talking about.  It was then that he told me that he had found two baby ducks and that he had to go and save them from getting run over on Montauk Highway.  After telling him in my best “mom voice” that he’d better be careful, I sent him on his way.

A few minutes later, I looked out our window to see him walking down the sidewalk carefully holding a paper bag.  He had managed to rescue one of the babies, when unfortunately the other ran out and got hit by a car.  He was so proud of himself and I was so proud of him, but also wondering what in the world we would do with a baby duck.  We put it in a box and the kids tried to feed it a few crumbs that were left over from my Levain Bakery scone.  As the kids debated what to name it while begging me to let them keep it, I called up our friend Dan Elitharp.  His wife’s family owned the last working Duck Farm in Eastport so I figured he would know what to do.  He kindly gave me two options.  Try to find the Mama duck, or go and buy some duck feed from Eastport Feed and have fun raising it till it was big enough to let go.

Because we are not great pet people, and more so because we wanted to give it it’s best chance, we decided for the first option.  Jeremy and Christian walked down to the pond and thankfully were able to find the baby duck’s mom and watch them both waddle away quite happily.  Christian was a little sad as he watched his pet duck dreams waddle away as well, but we thanked him for being awesome and for saving a baby duck’s life and reuniting it with it’s family. 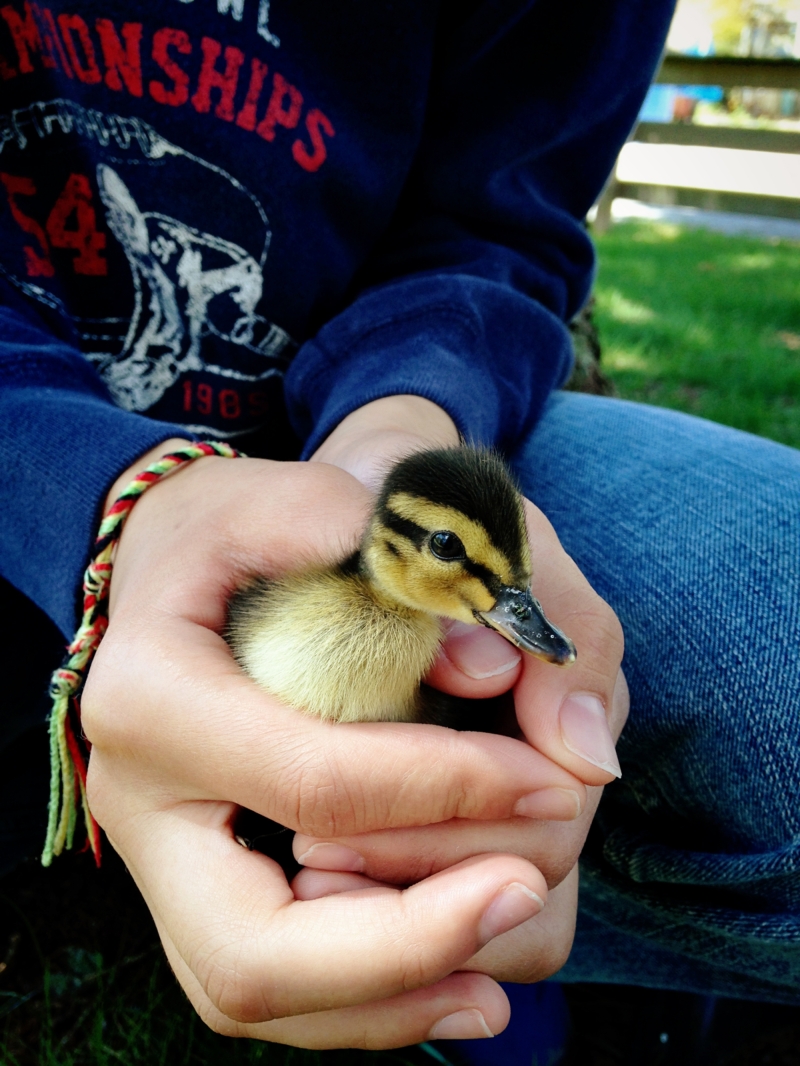 A little later, we would pack up our family to make the 45 minute drive up to King’s Park to see Michael at his Rehab.  We got there just as he was getting ready to go to Speech Therapy which was then followed by OT and PT.  He had spent the morning at the hospital getting a few things checked out, so overall, had quite a busy day.

While he was at therapy, we sat in the lounge and visited with Sally and Sarah.  It was so good to catch up with them and to hear that Michael had been having some good days of Rehab.  Our friend Danielle joined us later that afternoon along with Michael’s Grandma.

And while we were there this afternoon, we also had the privilege of meeting some of Michael’s close family friends who were visiting from Colorado.  They brought Michael this awesome hat as well as lots of love as they’ve been following his story from the beginning.  Speaking of the beginning, it’s hard to imagine that Michael is now working steadily through the fourth month after his accident.  I was looking back and found the very first post that I had written right after we had found out about Michael’s car hitting black ice and ultimately changing the course of his life’s journey.  It’s been amazing to think of all that he has been through since that day.

Visiting Michael today was so good.  We hadn’t seen him since Saturday, but I have to say that I felt I could tell a difference, even though it was only a few days.  Michael seems as though he is getting stronger and even holding himself a bit differently these days.  I know that he is getting some great care at the Rehab facility and this is something that we are so thankful for.

As we left the Rehab today, I looked up and noticed that the trees are finally starting to bloom those fresh new baby leaves that I love.  To me, they are symbols of the hope that Spring brings.  This day in general, with it’s baby duck and bright new leaves reminded me of the verse in Revelations, that says, “Behold, I am making all things new.”  Granted, it’s a bit out of context, but not when I stop to think that the great God that I serve is a God that makes all things new.  He’s been right beside Michael ever since his accident, as his life took an unexpected and new path.  And I know that God will continue to make new and beautiful things for Michael as he settles into his rehab, his therapies and his recovery.

After talking to Sally today, I know that Michael could use prayer for a few internal issues that his doctors are helping him to work through.  Thankfully, everything seems fine with his shunt and he is doing well with all of his therapies.  However, there are a few things that could use our prayers so that Michael’s body could be healthy and healed and strong as he continues to recover.