So just a few things.  First of all, I’m so happy to share that as of today, Michael has made it through his first full week of therapies at Rehab.  I remember so many days in the ICU where I’d overhear nurses and doctors mentioned the importance of getting Michael to Rehab as soon as possible.  For awhile there, it seemed like some distant goal with so many hurdles to overcome.  But now that it’s here, it’s just really exciting.  Because his first weeks were interrupted with back and forth trips to Stony Brook for medication and an infection, it was a bit of a rocky start.  But at the beginning of this week, we asked for prayer for a solid week of Rehab and with it being Friday, I’m so thankful to share that God blessed and answered our prayers for Michael.

Speaking of Rehab, Michael is doing a great job settling in.  And as I’ve shared, it’s been so nice that many of us have been able to help him get a good start by purchasing a few things that he’s needed.  We ran a very successful Comfy Clothes Campaign and we used that money to buy some pretty awesome clothes for Michael.  We also picked up a few room accessories and a nice cooler for Sally as well.  Michael’s room doesn’t have a refrigerator, so the cooler makes it nice for Sally to keep her meals fresh.

When it comes to much of the clothing that we’ve gotten for Michael, I really should thank Kohls for running such great sales as well.  Last week, when I stopped in, I was able to get seven items for $32.51 while saving $147 off the regular prices.  Kohl’s Cash, coupons and sales were able to help with this.  And I was so happy because when we brought the clothing up to Sally she said it was just what Michael needed.

And speaking of cool, comfy clothes, this was one of the shirts that we got for Michael.  It’s pretty awesome and has a big Chewbacca face on it.  Michael looked pretty handsome in it when I went to visit him yesterday.

And speaking of yesterday, I was so thankful for the time that I got to spend with Michael. I decided to drive up a bit on a whim after meeting with a friend for lunch.  When I got to Rehab, Michael had just finished his PT Session and was waiting a bit before heading off to Speech Therapy.  So I got to chat with him and keep him company in between these therapies.

I told him how everyone was praying for him and how we were all so happy with how well he’s done at Rehab this week.  I caught him up with how everything was going and what we had been doing at the church this week.  Michael responded back with some very nice long eye blinks as I talked.  And at one point, I asked him if I was talking too much, because I tend to do that and try to be aware of it.  Michael didn’t blink at all.  So then I asked him if he was okay with my talking, and bless his heart, he responded right away with two long blinks.  It made my heart pretty happy to see this. 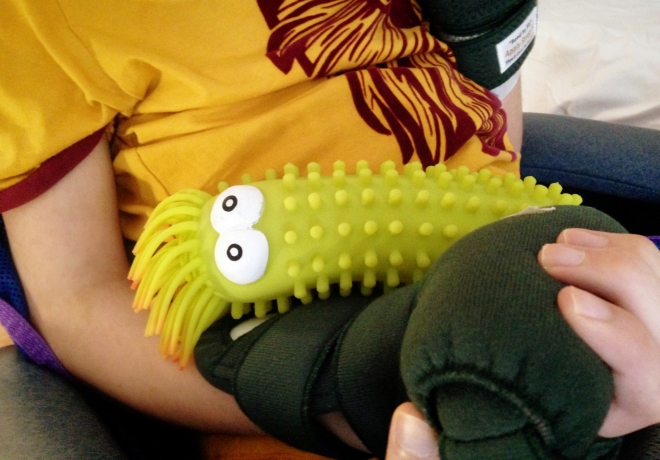 I’m so thankful that I got to see Michael at Rehab yesterday.  I’m so thankful for a new place for him that is committed to helping him to heal and to relearn many things.  I’m thankful for the nurses and the therapists at Rehab who care about Michael and who are working hard to help him to get stronger.

And I thought as Michael starts this new phase in his recovery that we could continue to pray and help commit Michael’s recovery to the Lord.  Proverbs 16:3 says that if you commit to the Lord whatever you do, your plans will succeed.

Michael has been through so much, but God has blessed him and worked miracles every step of the way.  Would you please join me in committing this year of Rehab to the Lord for Michael?  We can pray that God will continue to miraculously heal Michael’s traumatic brain injury.  We can pray that God would heal and strengthen his body through his therapies.  We can pray that God would be given honor and glory through Michael’s life and through his healing.  And we can do this on behalf and in honor of our incredible friend.  We know God loves Michael and that He is the one who will cause his recovery to be successful.

One thought on “Commit”